20 Years of Hearing with My CIs

My hearing had been progressively deteriorating since I was a teenager. Ten years before my implant, my hearing was at the stage where I was not able to carry on a conversation with anyone unless I was facing them. I felt self-conscious about my hearing loss and kept my hair long to cover my hearing aid. Unlike today, people in the seventies didn’t wear headphones or earpods. I was young and felt singled out.

I was a stay-at-home mom for seventeen years. As our children neared going to university, I wanted to return to work to help pay for their education. Constantly scanning the want ads, I did not have the courage to contact employers for fear of not understanding. I was feeling hopeless.

Can I let my guard down?

My decision to have a cochlear implant was based on the fact that I wanted to be able to use the phone again. I wanted to be able to speak to my children when they were away at school. Cochlear Implant surgery was a big decision for me. I had to educate myself not only about the outcome, but also about the risks. It was a very exciting and emotional time. The feeling of excitement also lead to thoughts of "It's too good to be true," and "Can I let my guard down and believe that I will actually hear again?"

Decision made and surgery fast approaching, I had my final appointment with my implant surgeon. That was when the wind was knocked out of my sails. My surgeon wanted to implant my left ear, which was my better ear and the one with the hearing aid. His theory was that the hearing nerve in my left ear had been stimulated over the years with a hearing aid, while the right one had not.

He wanted to give me the best possible chance with the implant. I understood this, except, all along. I was expecting my worse ear to be implanted. This would enable me to hear with my better ear in the waiting period before my CI was activated. It would also allow me to hear if the implant did not produce the expected results. I went home from that appointment very confused.

I immediately reached out to people on the CI internet forum to ask for guidance and their experience.

I immediately reached out to people on the CI Internet forum to ask for guidance and their experience. I knew that if I had my "good ear" implanted, I would not be able to wear my hearing aid anymore. I questioned my fate if the implant was not a success. I would be totally deaf. Was I willing to take that risk?

I took some time to think through both scenarios, as it had to be my decision. In the end, I chose to have the surgery in my better ear (the left), and there was no question in my mind that I had made the correct decision. I wanted this cochlear implant to be a success. If for some reason it did not work as I had hoped, at least I had tried my best! I was pumped and ready to move forward.

My surgery was a breeze, although I woke up from the anesthetic with a pounding headache. The drill that is used to make the indent for the implant is no larger than the dentist's drill. However, the pounding I experienced made it feel like much more. I was given a painkiller and felt so much better. I returned to work five days after my surgery.

It was quite the journey into the hearing world. However, it was not without a few bumps in the road. In 2014, it was discovered that I had developed a cholesteatoma, which is a cyst. This cyst was threatening my implant. The cyst was not related to my CI, but my implant surgeon had to remove it and hopefully save my implant.

It was a long but successful surgery, which included the removal of my middle ear structures and the surgical closing of my ear canal. On the bright side, my having the cholesteatoma actually led to my right ear getting implanted during the same procedure, in case the surgeon could not save my left cochlear implant. 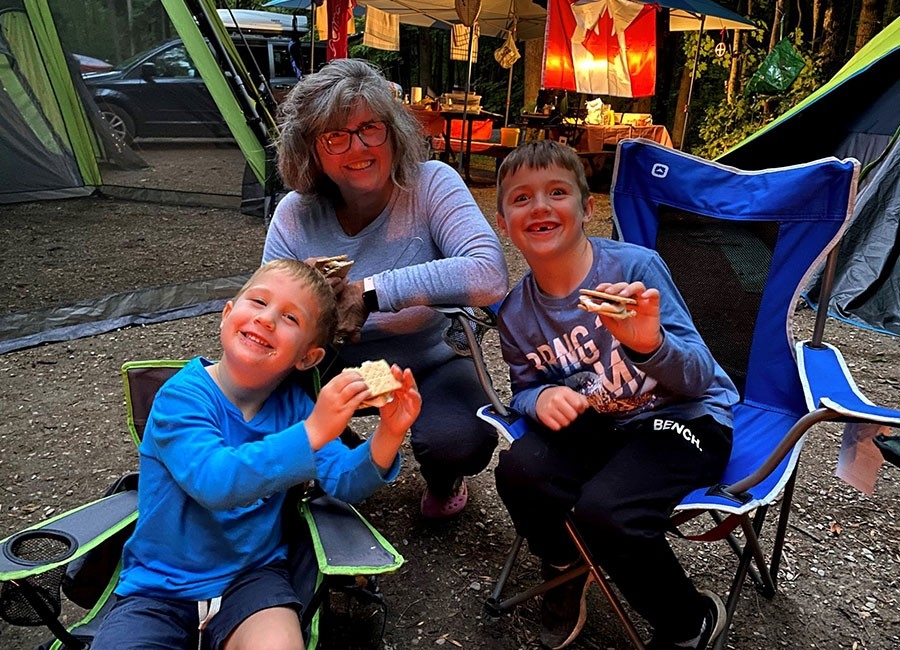 I am currently twenty-one years post-implant on my left side and seven on my right. I am using the phone and cell phone, and also listening to the radio, and enjoying music. I am thrilled when I hear an old song come on and actually recognize the music and understand the words. I have excelled way past the level I would have been content to reach on my hearing journey.

I am thrilled when I hear an old song come on and I actually recognize the music and understand the words.

I will always be deaf. However, when I am powered by my CIs, I am charged! I can hear in the dark, I can hear people speaking from behind me. I can hear! Even in this strange new pandemic world with these ubiquitous masks, I am hearing and understanding people!

I know my implant is not a 100% fix, but I would say that it is 95% successful. I am happy with that! I have to thank my ENT, my surgeon, the cochlear implant team that worked so wonderfully with me, and all the fantastic employees at Advanced Bionics who helped to make my cochlear implant and the rehab programs that help me to hear. My CIs have changed my life in a wonderful way and my family's lives, too. If you choose to have surgery for a cochlear implant, forgoing any unforeseen circumstances, it can change yours, too!

Heather is a part-time bookkeeper and full time Nana living in Dundas, Ontario, Canada. Her greatest treasures in life are her husband, her family and her extended family.  She enjoys baking, camping, hiking, cycling and spending every free minute with her grandsons. Having been hearing impaired for most of her life, becoming a bilateral AB CI recipient has changed her world.